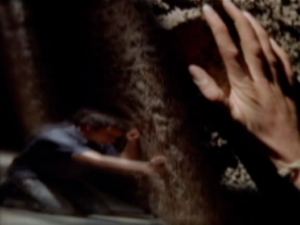 A short film shot on 16mm film using various optical and digital effects to create the Kafka-esque setting and mood for this dark parable. Gentle Wake from Poison explores the idea of multiplicity in mind as well as in time by tries to visually portray the connection between thought and then action – as well as, action and memory. The main character is convinced by a spider that he must allow it into himself as a means of giving “birth” to a new state of being and consciousness.